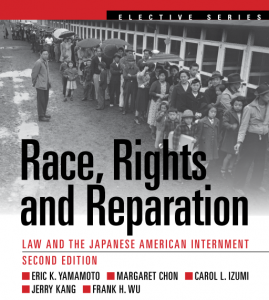 The 2nd edition has recently been published.
Read the Press Release.

During World War II, the United States government forced thousands of people of Japanese ancestry to live in internment camps on American soil. Race, Rights and Reparation: Law and the Japanese American Internment was the first text to critically explore the legal, ethical, and social ramifications of their internment—and their subsequent successful movement for reparations in the 1980s.

This authoritative Second Edition speaks to today’s tension between national security and civil liberties through informative parallels between the wartime incarceration of Japanese Americans and individual rights and liberties post-9/11.

This text was funded in part by a grant from the United States Congress as part of the Civil Liberties Act of 1988, which created an educational fund as part of the redress for interning Japanese Americans during World War II.

The 2nd edition revision was funded in part by a grant from the California Civil Liberties Public Education Program (CCLPEP), a State-funded grant project administered by the California State Library. The Prologue and Epilogue have been made publicly available through CCLPEP’s generosity.